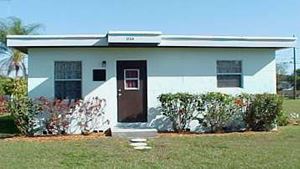 From early 1958 through late 1959, Zora Neale Hurston lived in this house, part of a new subdivision developed by Dr. Clem C. Benton, a prominent Fort Pierce physician and community leader. Dr. Benton allowed Zora, a family friend, to live in the house rent free. The house is on the National Register of Historic Places and was designated a National Historic Landmark by the U.S. Department of Interior and National Park Service in 1991. In 1995, it was moved 500 feet due north from its original location at 1734 School Court, to allow for expansion of Lincoln Park Academy where Zora briefly taught in 1958 (Heritage Trail Marker #2).

"From now on until death she was going to have flower dust and springtime sprinkled over everything. A bee for her bloom. Her old thoughts were going to come in handy now, but new words would have to be made and said to fit them."--Their Eyes Were Watching God (1937), Zora Neale Hurston

"As Dr. Benton recalled, Zora had a small kerosene oil stove on which to prepare meals. She also had simple furnishings, including bookshelves made out of fruit boxes."--Valerie Boyd, Wrapped in Rainbows: the Life of Zora Neale Hurston (2003)

Zora's home was a place where she could work quietly, thoughtfully, and without interruption. And while she craved peace and solitude for her work, Zora thoroughly enjoyed visitors and the company of her dog, Spot. She maintained a garden on the east side of the house. 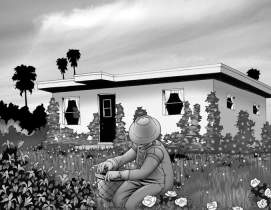 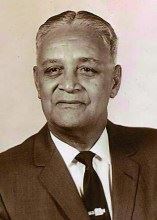 When Zora was unable to pay her apartment rent, Dr. Benton, who had just completed the construction of this house, allowed Zora to move in and live rent free. Dr. Benton recognized and appreciated Zora's talent, and assisting her was just one of the many great services he performed for the community.

Dr. Benton and his older daughter, Arlena, took turns dropping in on Zora, frequently taking her a plate for dinner. "She was a typical artist," Arlena Benton Lee remembered. "When she was caught up in her work, she didn't seem to think to cook" (Valerie Boyd, Wrapped in Rainbows: the Life of Zora Neale Hurston, 2003). Zora's neighbors also brought her plates of food. Arlena recalled that Zora was a frequent dinner guest at the home of Dr. Benton and his family. On Sunday afternoon, Dr. Benton picked Zora up to take her to his home for dinner with his daughters, Arlena and Margaret, and his son-in-law, Julius Lee, Jr.

Since Zora's death in 1960, the Zora Neale Hurston House has been maintained privately by the Benton Family, including Clem C. Benton, Jr., Arlena Benton Lee, and Margaret A. Benton. The City of Fort Pierce and St. Lucie County thank the Benton family for their efforts on behalf of Zora and our community's history. The Trail marker was installed with permission of the Benton Family.

Zora spent the last two years of her life in Fort Pierce, writing articles for The Chronicle newspaper and working on her last, never published book, a comprehensive biography and history of King Herod. Her residency in this home ended when after suffering a debilitating stroke, she required hospitalization and nursing care. She died on January 28, 1960, and was buried at the Garden of Heavenly Rest (Heritage Trail Marker #4). 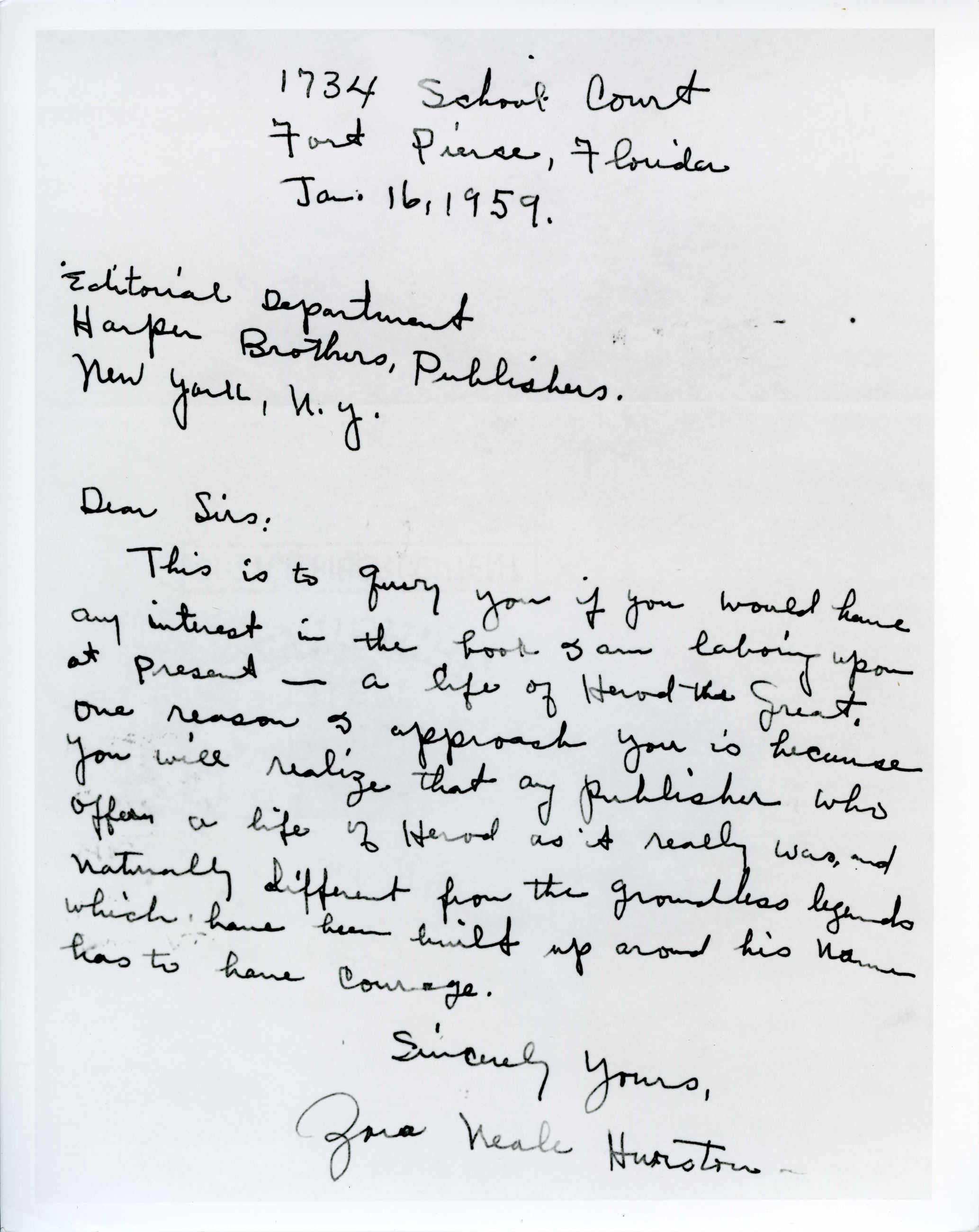 This letter, written just a year before her death, shows how Zora was still working from this house to find a publisher for her book on King Herod the Great. Zora spent years researching and rewriting this book, and trying to interest others in the story. She felt that few people understood or recognized the importance of Herod's reign as it related to the foundations of Christianity, Western Civilization, and contemporary world conflicts. She also recognized the story's potential for successful Hollywood film-making.

Deputy Sheriff Pat Duval went to see why smoke from a trash fire was rising over northwestern Fort Pierce in February 1960. If he had not been so diligent, the literary world would have suffered a grievous loss.

"It was against the law to burn without a permit," explained Duval, 89, now a retired captain of the St. Lucie County Sheriff's Department. "It was in the city, but I went anyway."

Duval asked the man tending the fire what he was burning. He replied, "stuff out of the former home of Zora Neale Hurston." She had died on Jan. 28.

Duval was one of the handful of people in St. Lucie County who appreciated Hurston.

"I had read a book by her in the library at Lincoln Park Academy, where she taught," recalled Duval. "And I had been introduced to her at Bethune-Cookman College, where our choir had gone to sing, by Dr. Mary McCloud Bethune. I knew who she was and why she was important."

Duval quickly pulled the papers out of the trash pile, extinguished the blaze and took them for safekeeping.

"They were her manuscripts," said Duval.

He gave them to Dr. Clem Benton, who had befriended a destitute Hurston. Benton turned them over to Hurston's family.

The singed documents have come a long way since then. 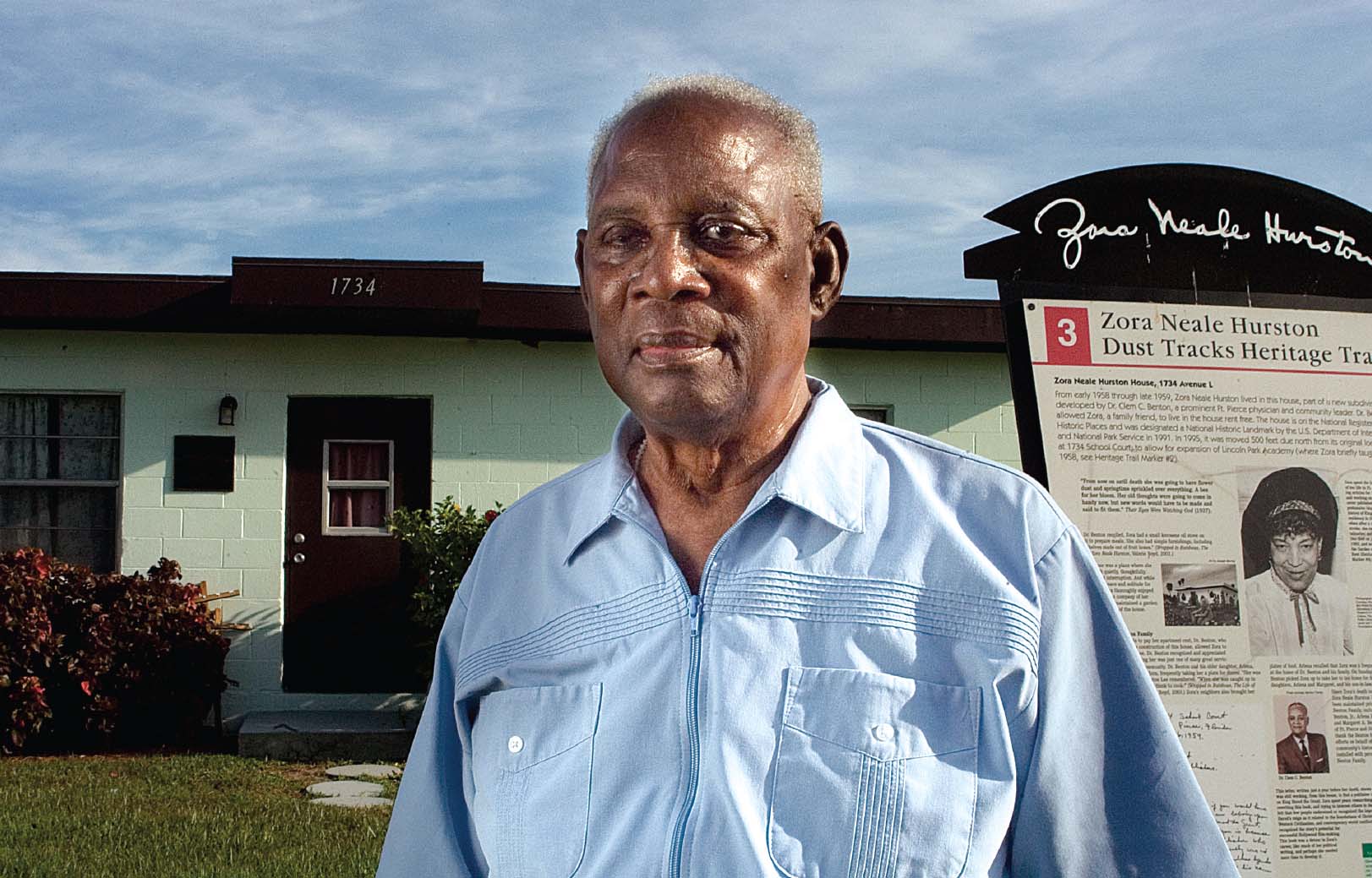